In our biweekly webinars, we have described the process of developing Prosetin—the first potential investigational drug to emerge from The Project ALS Therapeutics Core at Columbia (THE CORE)—in detail. A collaborative team led by Drs. Emily Lowry, Pieter Bos, Brent Stockwell, and Hynek Wichterle discovered a compound that rescued ALS motor neurons in the lab, and then spent over five years optimizing and testing this compound until we reached Prosetin—an orally administrable investigational drug designed with people with ALS in mind every step of the way.

But while Prosetin is the first in-house investigational drug to show promise in every preclinical ALS model we have at THE CORE, it is one of many therapeutic compounds emerging from THE CORE. Project ALS, and THE CORE scientific leadership, recognize that ALS is a complex, heterogeneous disease, and while our goal is to bring meaningful therapies to people with ALS—by developing and evaluating potential ALS drugs more rationally and thoroughly—no one treatment currently in preclinical or clinical development is the “silver bullet” that will end this disease. That’s why—while our top priority is to advance Prosetin to clinical trial as quickly and responsibly as possible—Project ALS remains committed at the same time to earlier stage discovery and preclinical testing for other potential ALS therapies at THE CORE.

Enter the paullones. We first heard about kenpaullone in 2013 from Harvard researcher Lee L. Rubin, PhD, whose lab found that kenpaullone was highly neuroprotective in a cellular model using iPS-derived motor neurons from people with ALS with either SOD1 or TDP-43 mutations.  Dr. Rubin told us that kenpaullone could not be used in people due to its insolubility ­– meaning it “crashes out” and forms crystals as soon as it hits the bloodstream­. In this state, kenpaullone would not reach motor neurons in people and could potentially be fatal, so Dr. Rubin pursued a parallel strategy of screening for compounds that hit the same cellular pathways as kenpaullone, but with more favorable drug-like properties.

But kenpaullone kept standing out as a rescuer of ALS motor neurons. In 2016, the lab of Chun-Li Zhang at University of Texas Southwestern Medical Center developed a new cellular model of ALS in which skin cells from ALS patients with the FUS mutation were directly converted to motor neurons, and found that kenpaullone also protected these motor neurons in a dish. At the same time, the Columbia team who developed our cellular drug screening assays for THE CORE found that kenpaullone protected ALS motor neurons from endoplasmic reticulum stress. Kenpaullone seemed uniquely neuroprotective in multiple ALS genetic backgrounds and different patient-derived motor neuron drug screening systems, so with the support and guidance of the Kleiner Family Research Initiative, Project ALS researchers got to work to try to improve kenpaullone’s solubility and brain penetrance to see if its powerful effects could eventually be conferred to people with ALS. 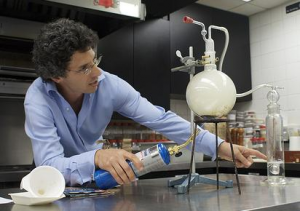 Kenpaullone is a tricky compound, and we realized we’d need to bring new technologies into THE CORE to improve our chances of making it into something suitable for people. In addition to the labs of Drs. Wichterle and Stockwell, we recruited a third group—the lab of Kent Kirshenbaum, PhD at New York University—with the goal of improving kenpaullone’s solubility and brain penetrance, while preserving its potent neuroprotective effects.  Dr. Kirshenbaum is a pioneer in developing a class of drugs called peptoids, which are engineered to have improved pharmacokinetic properties, and he has successfully applied these drugs to bacterial diseases and cancers. The team also carefully studied kenpaullone’s chemical family members, alsterpaullone and gwenpaullone, to better understand how small chemical differences in the paullone family of compounds might confer better properties for use in ALS.

Over three years and through dozens of iterations, these groups have now developed and studied a handful of top performers that rescue motor neurons and appear more soluble in our cellular drug screening assays. Now that CORE researchers are back in the lab, we are evaluating the brain penetrance of these promising compounds—and if one or more looks good, we will move it forward through THE CORE’s drug development and assessment pipeline, following the blueprint we’re setting with Prosetin toward potential clinical use.